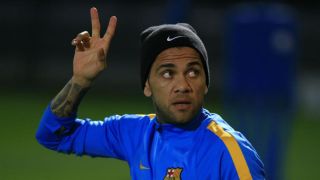 Barcelona full-back Dani Alves has hit out at sections of the Spanish press in criticism that appears to relate to coverage of Wednesday's Copa del Rey victory over Espanyol.

Barca ran out 4-1 winners at Camp Nou in the first leg of their last-16 clash which saw Papakouli Diop and Hernan Perez both dismissed inside the final 15 minutes - the former following a verbal exchange with Luis Suarez.

The Barca forward is accused of sparking a brawl in the tunnel after the match and was handed a two-match ban by Spanish authorities, although Barca have appealed against the sanction.

Amid the fallout from a heated derby clash, Alves hit out at the Spanish press and expressed his frustration at recent events.

"With each day that passes I feel more ashamed to be associated with this sport because of how they use us and how they play with us," read a post via Instagram.

"I thought that each one of us went out to defend our colours, our teams; I thought win or lose, I would go home and reflect on the bad things we had done - or to enjoy the good things.

"These days we are objects used by the press for their own benefit, so that they can sell newspapers.

"All the time they are talking less about football, strategies, plays, dribbles on goals, saves, the spectacular moments.

If Suarez's ban stands, he will miss the return at Cornella-El Prat on Wednesday as well as a potential quarter-final fixture, with Diop and Perez also suspended for the second leg.

Barca responded to Alves' in a statement: "Beyond the views, which the player can express freely, FC Barcelona feels the need to clarify that it does not support or share the offensive views published."