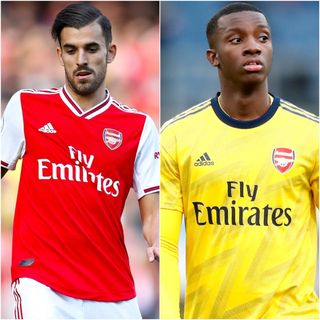 Arsenal midfielder Dani Ceballos insists he has no problem with team-mate Eddie Nketiah after they clashed ahead of Saturday’s 3-0 win at Fulham.

Spaniard Ceballos and fellow substitute Nketiah squared up to each other and had to be separated following a late challenge during the warm-up at Craven Cottage.

The pair took seats at opposite ends of the substitutes’ bench when the game kicked off.

Gunners boss Mikel Arteta said he had not seen the incident when asked about it post-match but Ceballos, whose tackle sparked the confrontation, has since moved to diffuse the situation.

The on-loan Real Madrid midfielder posted a picture on Instagram of himself and Nketiah smiling together as they left the ground, along with the words: “No problems here my brother” and a peace symbol.

Goals from Alexandre Lacazette, Gabriel and Pierre-Emerick Aubameyang gave the north London club a dream start to the new Premier League season, with Ceballos and Nketiah each coming off the bench in the second half.