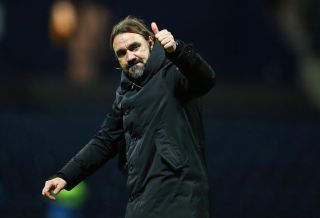 Norwich manager Daniel Farke wants his side to take confidence from their FA Cup win at Preston as attention switches back to their fight for Premier League survival.

Teenage striker Adam Idah scored a hat-trick in a 4-2 win at Deepdale as Norwich advanced to the fourth round of the competition for the first time since 2013.

The Canaries remain rooted to the foot of the Premier League table, seven points adrift of safety, but they are now unbeaten in three matches going into next weekend’s trip to Manchester United.

“First of all I’m really pleased we are through to the next round, someone told me it’s for the first time in seven years, so to manage this is quite good,” Farke said.

“This was a difficult draw for us, our fifth game in 14 days and away to a side fighting for promotion with the best home record in the Championship. To play this game away was difficult but I never had a feeling we would lose.

“From the first to the last second it was a pretty professional and concentrated performance so I just have compliments for the lads for that. We deserve to go through.”

Farke made eight changes to the side that drew 1-1 at Crystal Palace on New Year’s Day, one fewer than Preston boss Alex Neil made to his own team, and said he was happy with the performances of several players that came in.

“Also for several players who came into the side it was a good performance, so there will be more competition on the training pitch.

“Right now we are three games unbeaten. We know it’s a huge task to extend this unbeaten run at Old Trafford.”

Idah’s performance stole the show as the 18-year-old’s first Norwich goals arrived in a flood, offering hope the club may have a homegrown finisher arriving in time to help them in the relegation scrap.

Idah had been linked with a loan move away to continue his development but that could now change, with Farke saying he was in no rush to send him out given his potential to help Norwich for the rest of the campaign.

“We don’t have to make any calls, he has a long-term contract, he’s our player,” Farke said. “If we get the feeling it’s necessary to send him out on loan we will do that, but there is no emergency case to make that decision.

“We are in the driving seat. One thing is for sure, as long as a player is scoring goals for us and delivering a performance like this, it’s not like we want to loan our best players out.”