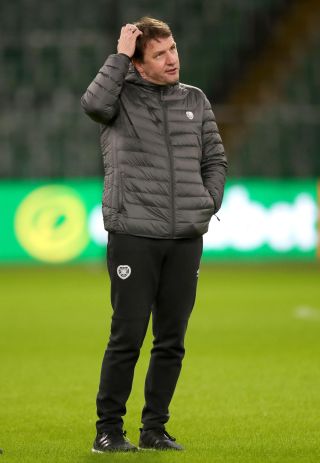 Hearts manager Daniel Stendel admitted the pressure was building on his team after they were held to a 2-2 draw at home to Hamilton.

Two goals from Marios Ogkmpoe put the visitors in a commanding position. The sending off of Accies defender Jamie Hamilton, though, changed the complexion of the contest and second-half goals from Jamie Walker and Craig Halkett earned Hearts a point.

The result leaves the Tynecastle side still bottom of the Ladbrokes Premiership with just 11 games left to play.

“It’s not easy because we don’t have so much time,” admitted Stendel. “And the situation from week to week is not getting better. We need to handle it.

“We expected to win this game against Hamilton and we didn’t do it. It’s just one point. The next big game is now St Mirren.

“We don’t have as many games left and every week there is more pressure. And we need to sort it.”

Hamilton coach Guillame Beuzelin revealed his team had come to Hearts to try to win and were deeply disappointed not to have held on after going into a two-goal lead.

He said: “I think we did enough to take all three points. We were hanging on and hanging on, but in the end there’s a lack of concentration and we’re punished for it.

“We worked so hard to get three points. We’ll take one, but I think we should have won the game.

“If you’d have offered me a point before the game I’d have said no. We came here to take three points.

“It was a massive opportunity to make the gap bigger between us and them. OK, Hearts are a big club, but they are where they are so we wanted to come here and win.”

Beuzelin pointed to Hamilton’s red card as the turning point in the game.

“It’s a ball over the top, which Jamie anticipated, and he is first to the ball, as a good centre-half should be.

“Unfortunately, it’s hard to call after that but the ref had to make a call and I can’t complain about the red card. After that, Hearts had to dig deep for a point.”