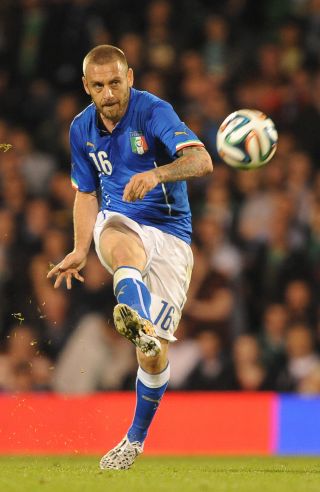 Departing veteran Daniele De Rossi has rejected the chance to move straight into a director’s role at Roma as he “still feels like a player”.

The 35-year-old midfielder, who has made 615 appearances and scored 63 goals across his 18-year career with Roma, will leave the capital club this summer after being told his contract would not be extended.

Roma’s Serie A campaign and De Rossi’s career in Giallorosso end at Parma on May 26, with a Champions League place still within reach.

De Rossi alluded to his disappointment that the decision was not communicated to him earlier, a lack of courtesy chief executive Guido Fienga would apologise for during a press conference called on Tuesday.

But with his 36th birthday looming large in July, 117-time Italy international De Rossi had suspected what was coming.

He said: “I realised the decision the club were going to take regarding myself. I’m almost 36 and I know how football is, but I didn’t want to distract from our European race.

“I thank the directors for their offer – I respect it and appreciate it, but I still feel like a player.

“I don’t agree that the decision should have been mine alone. The club exist to make these sort of decisions, alongside the coaches. Someone has to make that ultimate call.

“I’m not over the moon, but I accept the decision. I have no resentment towards that. We never spoke about money: that was not the crux of the matter.

“Eventually I would like to be a coach. At this point I don’t see myself becoming a director, but at Roma a role like that would have some meaning. I need to go away and study, to learn – it will be a long journey.”

De Rossi broke into the first team in the autumn of 2001, making his debut under Fabio Capello several months after Roma had won their third Serie A title and last to date.

He twice won the Coppa Italia, first in 2007 then again in 2008, but the Ostia Mare-born midfield enforcer admitted he would have liked to collect more silverware across his near two-decade career.

“I’ve always loved Roma,” he said. “My advice to the fans is to back this squad: they are a good group, who deserve respect.

“Roma and I chose each other. There is a lot of love between us, both now and in the future – even if it will be in another form.

“Don’t bet against seeing me in with the fans at a few away games, having a sandwich and a beer and cheering on my friends.

“Looking back, some specific moments I would change. But overall, I wouldn’t change anything about staying loyal to this team.

“If I had a magic wand, I would have put a few more trophies on the mantelpiece.”

Reports in Italy suggest De Rossi only learned that his time on the Stadio Olimpico pitch was over on Monday, when Giallorossi chief executive Fienga offered him a position as his deputy.

Fienga said: “I apologised to Daniele, on behalf of the club, for not speaking to him sooner – it has been a problematic season.

“The club is aware of the mistakes we’ve made, and we are reflecting on that. But we appreciate the way Daniele has accepted the decision.”