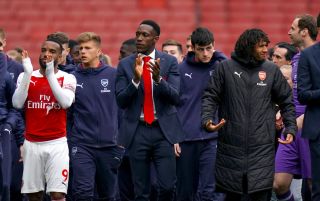 Danny Welbeck will leave Arsenal when his contract expires at the end of the season, head coach Unai Emery has confirmed.

The England forward has not played since breaking his ankle against Sporting Lisbon on November 8 and his future had been in doubt.

Arsenal had not made any official announcement until the 28-year-old was included in a post-match guard of honour following their final home game of the season on Sunday.

Emery’s side drew 1-1 with Brighton to have their hopes of a top-four finish all but dashed, with the players then completing the now customary lap of appreciation.

It had already been confirmed that a guard of honour would be in place for the retiring Petr Cech and Juventus-bound Aaron Ramsey.

But it was a surprise to see Welbeck also honoured with a memento from Arsenal chairman Sir Chips Keswick, with the stadium announcer adding that the former Manchester United man would be “missed in the dressing room”.

Emery, who has been asked about Welbeck’s contract situation recently and given nothing away, confirmed his departure at the end of his press conference.

“I spoke with the club about this situation. The decision is he’s going to leave,” he said.

Welbeck joined Arsenal from United in 2014 and won the FA Cup with the north London side, where he was often utilised as an attacking option off the bench.

He was already being linked with a move away from the Emirates Stadium in the January transfer window before suffering his injury in a Europa League group game.