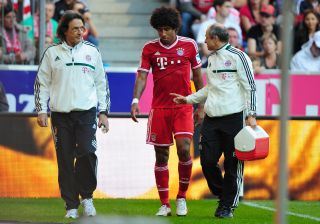 The 30-year-old saw his run of previously appearing in every fixture this season ended when he was forced off after 43 minutes against Mainz earlier this month after taking a nasty knock to his left foot.

The Brazilian has missed a Bundesliga clash against Hertha Berlin and a UEFA Champions League match with Viktoria Plzen during his recovery, both of which Bayern won.

But after resuming full training on Wednesday, Dante could be considered for selection against Hoffenheim on Saturday, a game that could also feature Arjen Robben and Toni Kroos, despite the pair being substituted early in the first half against Hertha with groin injuries.

On his recovery, Robben told the club's official website: "It's getting better day by day.

"But we will not take any risks."