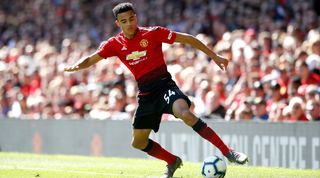 The Mirror reports that although Beckham isn’t a licensed intermediary, he is thought to have been involved in Leroy Sané’s potential move from Manchester City to Bayern Munich over the summer.

Beckham is listed as a director for the company Football Management Limited and could help them grow an exclusive list of clients, with former Nottingham Forest striker David Johnson in charge of managing players.

FA rules prevent Beckham from obtaining an agent licence as he is a part-owner of Salford City, but the outlet points out that it is common practice for third parties to arrange deals before licensed agents sign off on them.

It is believed that Manchester United youngster Mason Greenwood is a possible target for Beckham’s company.

The 17-year-old has been given chances to prove his worth at Old Trafford this summer, after United sold Romelu Lukaku to Inter Milan for £74m.

Since then Anthony Martial has missed matches through injury, and Greenwood has responded with two goals – earning him a place in club history en route.

By scoring against Astana in the Europa League, Greenwood became United's youngest ever scorer in European competition – beating George Best by 170 days.

The academy graduate followed that up with the opening goal in the Red Devils' midweek EFL Cup tussle with Rochdale at Old Trafford, before the hosts were pegged back and forced to beat their League One opposition on penalties.

The former England captain is set to launch his Inter Miami franchise in MLS next year, and the new club has been linked with several big-name players like Mesut Ozil and Lionel Messi.

Manchester City legend David Silva has also been strongly linked with a switch to the US's east coast.