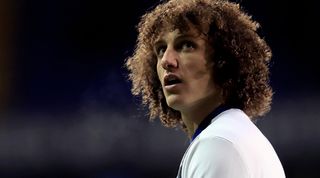 The former Juventus coach succeeded Guus Hiddink last summer and, despite a shaky start, is on course to lead the Londoners to a league and FA Cup double.

Defeats to Liverpool and Arsenal had left the Blues in 8th place after six matches, but a switch to the Italian's favoured 3-4-3 formation brought instant rewards as Chelsea duly won 13 consecutive Premier League games and rose to top spot in the standings.

A key figure in the Blues’ defence this season has been David Luiz, who rejoined the club last summer after spending two trophy-laden campaigns at Paris Saint-Germain. The Brazil international has heaped praise on his new manager’s methodical approach and ability to motivate his men during the season.

“He’s extremely meticulous,” Luiz reveals in the June 2017 issue of FourFourTwo. “There isn’t a tiny detail he isn’t aware of. He’s the type of guy who sees things most people wouldn’t. In training he creates situations that he thinks could occur during the upcoming games – and it makes all the difference. He also knows how to motivate us and gives confidence to the whole squad. We all know that he trusts in our ability and one of his best qualities is that he treats everyone equally.”

Luiz made 143 outings during his first Stamford Bridge spell from 2010-14, winning the Champions League and Europa League in successive seasons before becoming the world’s most expensive defender by joining PSG for £50 million.

However, the centre-back says he was always open to the idea of moving back to London and trying to lift the Premier League title for the first time in his career.

“You can’t predict these things, but I always left the door open for a possible return,” he says. “There are moments in your career when you feel like a cycle has come to an end – and that’s what I thought when I left the club three years ago.

“I had already won several titles with Chelsea, played my part in a beautiful period in the club’s history and made so many friends. I thought it was time to move on, so I had no regrets. But things change quickly in football.

“Winning the Premier League has always been an obsession of mine. This is one of the toughest competitions in the world. We’ve worked hard to make this dream come true.”

Read the full interview with David Luiz in the June 2017 issue of FourFourTwo magazine, in which we profile Barcelona and Brazil superstar Neymar and his quest to take on Lionel Messi’s mantle as the best player on the planet. Also this month, we slip on a neon jacket and become a steward for a day at The Hawthorns, speak to Manolo Gabbiadini about his sensational start to life in a Southampton shirt, go One-on-One with former Germany international Christian Ziege, review 23 of the game’s maddest owners and remember when Manchester United stopped Liverpool from completing the Treble in the 1977 FA Cup Final. Order it now, and then subscribe!