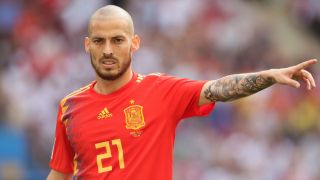 David Silva is pondering bringing his remarkable international career with Spain to a close and plans to seek advice from his Manchester City coach Pep Guardiola.

Silva's exploits with Spain have coincided with the most successful period in the country's history, winning the 2010 World Cup between back-to-back successes in the European Championship.

But, at 32 and coming off the back of a disappointing campaign at Russia 2018 where Spain were eliminated in the last 16 by the hosts, Silva is contemplating concentrating his focuses elsewhere.

And, after his son Mateo's premature birth at the end of 2017 left the newborn fighting for his life, Silva's family have been his primary focus since returning from Russia.

"Since the World Cup I have been concentrating 100 per cent on my son," Silva is quoted as saying by the Mirror.

"I'm returning to Manchester on Sunday and then I will start thinking about football again.

"I honestly don't know whether I will continue playing for Spain. It is something I must decide in the coming days and weeks and when I go back to Manchester.

"At this moment, the only things on my mind are my son, my girlfriend and my family.

Silva has played 125 times for Spain, making him the sixth most-capped player in their history.