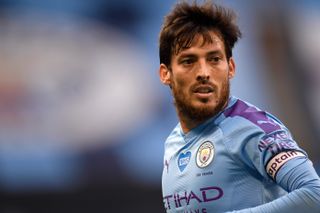 David Silva said his family had played a key role in helping him choose to join Real Sociedad after the former Manchester City man turned his back on an offer from Lazio.

The 34-year-old playmaker has ended a decade-long spell with City to join Sociedad on a free transfer, signing a two-year contract with the Basque club.

That has angered Lazio, who believed they were in pole position to sign Silva, leading their sporting director Igli Tare to declare he no longer respected Silva as a man.

🗣️ @21LVA: “I chose Real because they are doing things well and their style fits me well” 💙⚪#OngiEtorriDavid#AurreraReala— Real Sociedad (@RealSociedadEN) August 18, 2020

But Silva, who missed a significant portion of the 2017-18 season shuttling between Manchester and a hospital in Valencia after his son Mateo was born prematurely at 25 weeks, said he had to include his family in the decision.

“I have had quite a few offers, but I have decided on the Real one because it is a club that is doing things very well and the style suits me very well,” Silva said on the club website.

“I already know San Sebastian, from when I was in Eibar a long time ago, and it is a beautiful and quiet area. My family has taken a big part in the decision.”

Lazio were angered that the Spaniard neglected to tell them he had rejected their contract offer before finalising his return to Spain, and the Italian club on Tuesday issued a curt statement in which Tare did not hold back.

“I learn about David Silva’s transfer to Real Sociedad. I have great respect for the player, but not for the man,” said Tare.

Silva was free to sign for a new club after City’s elimination from the Champions League on Saturday night brought to a close a glittering spell in which he won 11 major trophies and made more than 400 appearances.

Silva might feasibly have been in a position to challenge for the Serie A title with Lazio, who finished five points behind winners Juventus this past season, but though Sociedad are considerably further off the pace in LaLiga he will get his chance of silverware there too.

The club have reached the final of the Copa del Rey, though their meeting with Athletic Bilbao has been indefinitely delayed in the hope of it being played in front of fans.

“I hope that we can finish it off well, and that with my small contribution we can win things,” Silva said.

“I saw a lot of LaLiga and Real played very well. I have good pointers from the coach. I think that a lot of good things can be done. It is a beautiful and exciting challenge.”