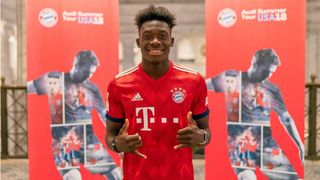 Bayern Munich's new signing Alphonso Davies says he rejected offers from other clubs when he saw the Bundesliga champions' plans for him.

Davies, a 17-year-old forward, was presented as a Bayern player on Wednesday after they agreed a reported initial fee of €11.2million with Vancouver Whitecaps, an MLS record.

The Canadian will stay in Vancouver for the remainder of the MLS season before moving to Germany in January, and he admits the effort Bayern went to in order to convince him of their plans played a crucial role in his decision.

Speaking to reporters on Thursday, Davies said: "I've been dreaming about this as a kid.

"A lot of clubs showed interest, but they [Bayern] came through. They showed me their plan for me on the field, showed me how they would put me in the team.

capture Canadian gem Alphonso from the MLS while on tour in the US. July 26, 2018

"I was a little bit surprised – they really put in the effort to get me. I just took it in and decided that that was the club for me.

"I'm a little bit nervous, but life comes with challenges and I'm ready to take on this one.

Davies made his debut for the Whitecaps in 2016 at 15, becoming the second-youngest player to appear in MLS, behind Freddy Adu.

He became an established first-team player in 2017, making 27 league appearances, before blossoming this season with three goals and six assists in 20 games.

Ghanaian-born Davies has also won six international caps for Canada, becoming their youngest ever player when he made his debut against Curacao last year.