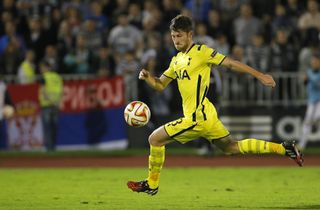 The 21-year-old defender moved to White Hart Lane from Swansea City in the close-season, but has so far been utilised almost exclusively in cup competitions by Mauricio Pochettino.

Davies, who is currently on international duty with Wales, has enjoyed just 18 minutes of league action for his new club and faces a challenge to dislodge Danny Rose as Spurs' first-choice left-back.

However, he remains positive over his future prospects and insists he does not regret leaving the Liberty Stadium behind.

"It is a difficult situation, because you want to play as many games as you can. But I think as a player once you become comfortable, sometimes it is time to look for that next challenge," said Davies ahead of Friday's Euro 2016 qualifier against Bosnia-Herzegovina in Cardiff.

"I feel training with the players Spurs have every day is definitely helping me. When I get a chance to show that on the pitch I will.

"I have to be confident, if you don't believe in your own ability there is not much point in playing the game.

"I am happy with my performances. I am constantly working as hard as I can to make that left-back spot my own. I did that at Swansea and have to do it again."

Davies' main rival at international level is former team-mate Neil Taylor, who has reclaimed a starting role at Swansea following his countryman's departure.

"It is a duel with me and Taylor [for Wales] and it is good to have that competition in the squad," said Davies.

"Whether it's an advantage that Taylor's playing regularly is up to the manager [Chris Coleman].

"Playing in the Europa League stands you in good stead to play in these European qualifiers. I think I am ready for two games with Wales - I am still playing 90 minutes a week."