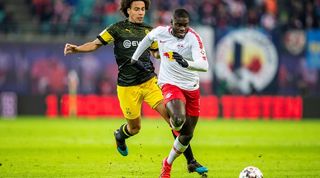 The 20-year-old helped his side to third place and the best defensive record in the Bundesliga in 2018/19.

A source close to the Gunners has told ESPN FC that the Emirates club have made the Frenchman a top target for the summer transfer window.

Leipzig are aware of the Premier League side’s interest in the centre-back, but an official bid is yet to be made.

The German outfit want to offer Upamecano a contract extension, with his current deal set to expire in 2021, but a sale could be considered if the player agitates for a move.

However, Arsenal’s defeat to Chelsea in the Europa League final on Wednesday means that they will not be able to offer the youngster Champions League football next season.

That could prove to be a stumbling block in their hopes of signing the highly-rated defender, while the report warns that Leipzig’s asking price could be too high for Arsenal without the injection of funds that comes from playing in European football’s top competition.

A German source also told the outlet that the player would be less likely to push for a move to north London if Europa League football was on offer in the 2019/20 campaign.

SURPRISE! 5 teams you didn’t know have played in a European Cup final

UNLUCKY The 9 best teams that DIDN'T win a thing