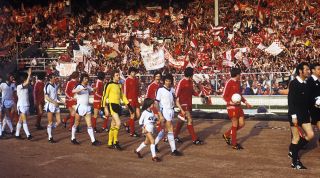 Despite Ajax’s recent best efforts, the Champions League final continues to be the domain of teams from England, Spain, Germany and Italy.

In fact, you have to go back to the 2004 showpiece between France’s Monaco and Portugal’s Porto for the last time that two clubs outside the Big Four graced such a stage.

However, Europe’s biggest club competition used to be a much more level playing field. Here are five now-unfashionable sides who very nearly got their hands on the coveted trophy...

Continually hampered by financial difficulties, Reims have spent the majority of the last four decades yo-yoing between the second and third tiers of French football.

But thanks to Golden Generation players such as Raymond Kopa, Jean Vincent and Just Fontaine, the club dominated the post-war era and won six Ligue 1 titles in the process.

They also graced the first ever European Cup final in 1956, pushing Alfredo Di Stefano and Real Madrid all the way in a thrilling 4-3 defeat at Paris’s Parc des Princes. The Spaniards once again denied them the trophy in 1959 with a 2-0 victory which secured the fourth of five consecutive European Cup wins.

Thirty-five years before Red Star Belgrade brought home the European Cup to Yugoslavia for the first and last time, their fiercest rivals very nearly beat them to the punch.

In fact, FK Partizan were just 20 minutes away from defeating giants Real Madrid at the Heysel Stadium thanks to a rare goal from legendary sweeper Velibor Vasovic. However, two stunning strikes from Amancio and Fernando Serena helped the Spaniards pick up the trophy for a sixth time.

Upon their return, almost every prominent FK player transferred to a Western club, plunging them into a crisis from which they took a decade to recover from.

Greece famously pulled off one of European football’s biggest international shocks in 2004, and its biggest club side very nearly achieved a similar feat at club level in 1971.

The only Greek team to ever reach a major European final, Panathinaikos dispatched of Jeunesse Esch, Slovan Bratislava, Everton and Red Star Belgrade before heading to Wembley for their big encounter against Ajax.

Sadly for the side managed by Ferenc Puskas, however, they were totally eclipsed by another playmaker entering his prime – Johan Cruyff. Indeed, the Dutchman helped steer Ajax to the first of three consecutive European Cups, setting up the late Arie Haan goal which bookended their 2-0 victory.

They may have failed to go any further than the group stages during their 12 Champions League campaigns, but the Belgian side enjoyed far more success when the continent’s premier club competition was known simply as the European Cup.

Indeed, a year after reaching the quarter-finals, Ernst Happel’s side defeated the likes of Panathinaikos, Atletico Madrid and Juventus to make the 1978 final against Liverpool.

Having lost to the Reds in a two-legged UEFA Cup final just two years previously, Brugge once again suffered heartbreak at the hands of Bob Paisley’s men as Kenny Dalglish scored the only goal in a relatively dour encounter at Wembley.

Nottingham Forest fans of a certain age won’t ever forget that Malmo once graced such a major stage: the Swedes were the team that Brian Clough’s men defeated in 1979 to lift the first of two European Cups in a row.

However, the unremarkable final at Munich’s Olympiastadion is unlikely to have stuck in many neutrals’ memories. Indeed, managed by former Maidstone United boss Bob Houghton, a highly defensive Malmo stifled this game from the offset.

Only a header from Trevor Francis – the £1 million record signing making his European club debut – on the stroke of half-time provided any kind of excitement. But it was enough for Forest.

LIST The 9 best teams that DIDN'T win a thing