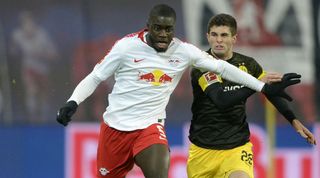 According to the Daily Star, Arsenal's number one defensive target is Barcelona's Samuel Umtiti.

However, the World Cup winning defender is set to cost north of £35 million, which would use up most of Arsenal's summer budget.

As a result, the Gunners are reportedly stepping up their interest in RB Leipzig's Dayot Upamecano.

The 20-year-old is highly rated and Arsenal believe he could freshen up a declining backline.

Arsenal had scouts watch the Frenchman as he played 71 minutes for the France Under 21s in a 3-0 win against Belgium.

Quiz! Can you name the Portugal and France line-ups from the Euro 2016 final?