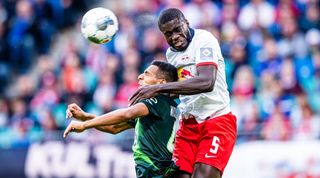 The north London club reportedly had a £55 million bid knocked back by the Bundesliga side over the summer for the 20-year-old.

But they haven’t given up hope of landing Upamecano, and were given a boost in their pursuit of the youngster when German reports said Leipzig will be open to a lower offer because of fears they could lose the player for free when his contract expires in the summer of 2021.

The Sun has reiterated those claims by reporting that Arsenal could secure the signature of the Frenchman for as little as £40 million in January or next summer.

Upamecano is yet to sign fresh terms with the German club and Arsenal could pounce as they look to solidify their creaking backline.

Unai Emery looked to add some steel to his defence with the addition of the experienced David Luiz from Chelsea over the summer.

Teenager William Saliba was also brought in before being sent back to Saint Etienne on loan, but Upamecano is viewed as someone who can be a long-term option in the centre of the Gunners' defence.

The France Under-21 international returned from injury last month and has featured in six games for Leipzig this season in all competitions, including Wednesday’s 2-1 win over Zenit in the Champions League.

He is in his third season as a first-team player with the Bundesliga side and has already racked up 59 appearances in Germany’s top flight before his 21st birthday, which is on Sunday.

A knee injury kept Upamecano sidelined for the second half of last season as Leipzig finished third.