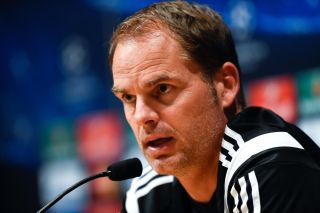 Ajax head to Camp Nou looking to avenge their 4-0 defeat in Catalonia last season, but also buoyed by their 2-1 win in the reverse fixture on home soil.

In Amsterdam last term, Ajax survived what proved a consolation goal from Xavi and a red card for Joel Veltman to pick up a famous win against the Spanish giants.

Himself a former Barca great, De Boer stated his side should go into the fixture full of confidence.

"We can get a result in this game," he said. "Last year [when Ajax defeated Barcelona in Amsterdam] we saw that we can get something from such a match.

"But, for that, we have to perform at our maximum level. Barcelona are at a higher level compared to us and have more experience. For every team playing here, it is difficult to collect points, but we will try.

"For me, the most important thing is that we play according to our style and with confidence.

"I believe that we have grown [compared to last season], and that we are not inferior to big teams. This is our moment; we just have to keep faith in our philosophy."

Barcelona have been in fine form at home this season - boasting a 100 per cent record in all competitions without conceding a goal.

However, they lost their last Champions League match 3-2 against Paris Saint-Germain.