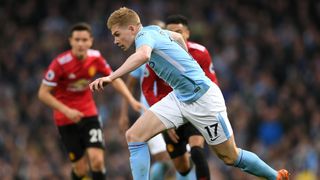 Kevin De Bruyne expects to be available for November's Manchester derby as the Manchester City midfielder continues his rehabilitation from a knee injury.

De Bruyne, City's player of the season as they lifted the Premier League and EFL Cup last term, suffered lateral collateral ligament damage during a training session in August.

An initial prognosis of around three months on the sidelines placed his participation in the November 11 clash with Manchester United at the Etihad Stadium in doubt, but the Belgium international believes his recovery is moving ahead of schedule

"I still need three, four, five weeks, but I'm getting there," he told HLN at the launch of FIFA19.

"Hopefully I can be back soon, help the team and perform well.

"I'm hoping to be back after the next international break. I think I will be back for the derby."

Happy with the two awards at the FIFA19 Ratings awards. Thanks for having me September 20, 2018

City face a busy run of games after the October international break before taking on United, with Premier League matches at home to Burnley and Southampton coming either side of a trip to Tottenham, while the Champions League brings a double-header against Shakhtar Donetsk.

Pep Guardiola's side are unbeaten in their opening five top-flight matches and sit two points behind early season pacesetters Liverpool and Chelsea, but they went down to a surprise 2-1 Champions League defeat at home to Lyon on Wednesday.