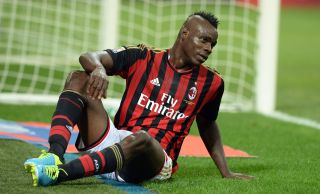 Balotelli, 23, was judged to be one of the three most overrated players in Italy's top league by 50 players who voted anonymously.

However, experienced manager De Canio, who has taken charge of Udinese, Napoli, Genoa and Lecce among others, feels the former Manchester City forward is gradually developing into a special talent.

"I believe (Balotelli) is a player of great level," De Canio told Tuttomercatoweb.

"Balotelli has great potential and, day after day, is expressing and improving more and more. Let us not forget that Balotelli is still very young."

Asked for his thoughts on Balotelli being labelled overrated, Cannavaro suggested a reason to La Gazzetta Dello Sport: "Fear, perhaps?

"He has an attitude that (they) do not like, then is strong and opponents are scared of him."

Balotelli returned to Italy in January after two and a half years with Manchester City and is currently with his national squad ahead of World Cup qualifiers against Denmark and Armenia.