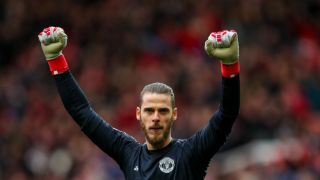 David de Gea has been crowned Manchester United's Player of the Year for the fourth time, eclipsing Cristiano Ronaldo's record.

De Gea reclaimed the prize from previous winner Ander Herrera at a glitzy ceremony on Tuesday, with the goalkeeper also collecting the Players' Player of the Year gong.

The Spain number one is the only United player to have started all 35 Premier League matches this season, with his 17 clean sheets set to win the goalkeeper the competition's Golden Glove prize for the first time.

"It's difficult for words what Manchester United means to me," De Gea said after lifting the Sir Matt Busby trophy.

"It's amazing to play for the club, the history, the fans, everything. It was hard in the beginning, but I believed in myself, I worked hard and I am proud of myself as well.

"I want to say thanks to everyone. I didn't expect to win this one. I have four, it's amazing for me and thanks again to everyone."

Michael Carrick was given a special achievement award ahead of his move into a coaching role at Old Trafford, while Nemanja Matic took the award for best goal for his thunderbolt against Crystal Palace.

"The meaning is important," said Mourinho. "I think the dream of every boy that arrives at the club is to play for the first team.

"When the dream becomes true, the next dream is to play in big matches and to play in the Champions League and eventually to play for the national team. This player gives everything, in five or six months, so my Player of the Year has to be Scott McTominay."

Prior to the awards ceremony, Zlatan Ibrahimovic sent his old team-mates a message, the former Sweden star having left Old Trafford to join LA Galaxy.

"Hi guys," said Ibrahimovic. "I hope you are doing good. I see you are doing well. You made it to the [FA Cup] final, which I like a lot, even if I am not there!

"Here, everything is okay. I enjoy the sun every day and I think you guys are supposed to be enjoying your weather. I want to say to all the fans: 'I miss you, I miss playing at Old Trafford, seeing all of the red shirts, I have great memories from there'.

"I want to thank everybody for the push, for the energy, for the adrenaline you gave me. I want to thank my team-mates also because you have been fantastic and you made it easy for me, especially in the first year and even in the second, from another point of view.

"Coach, I miss you also. You are doing well. You know what you need to do to win. There is no secret behind it. I hope you win the final."

When Zlatan talks, you listen.Turn your volume up and hear this special message from ! May 1, 2018