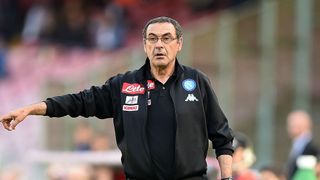 Maurizio Sarri can become Napoli's Alex Ferguson and remain with the Partenopei for life, according to president Aurelio De Laurentiis.

The 58-year-old was a surprise replacement for Rafael Benitez in June 2015 but the former Empoli boss has turned Napoli into Serie A title contenders.

In his 95 matches in charge, Sarri has won 61 in all competitions - losing only 16 - and for a second successive season they are challenging in the higher reaches of the table.

Such is Sarri's impact at San Paolo, De Laurentiis says he has a job for as long as he wants.

"What pleases me is that my intuition with Sarri was right," he told Il Mattino.

"When I got him from Empoli I saw banners that challenged the choice. But I had always been convinced of having selected the right option.

"He will be the coach of Napoli for much longer, because he has a multi-year contract with a clause which only comes into effect next year.

"This is his home, for me he can remain living in Naples for life and can decide take on a 'Ferguson' role."