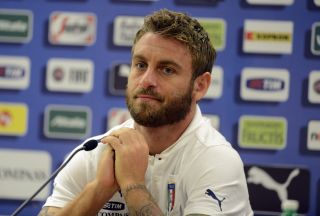 The Barcelona star has been ruled out of the match at Rome's Stadio Olimpico with a thigh injury, while Mario Balotelli is missing for the hosts with a knee problem.

"From our point of view it's a pity Messi won't play, it would have been the first time for me to face him and it was fascinating, it was a reason more to be happy to play the match.

"Hopefully we will have other chances to face him in the future and I'm convinced it will be a great match anyway."

De Rossi said he was unsure whether Roma team-mate Pablo Osvaldo - who has been linked with moves to Fulham and Southampton - would stay with the club.

"I don't know if I'm optimistic or not on the Osvaldo situation," he said.

"Roma would surely lose a very strong player without him and we would lose a great guy, a team-mate, a friend.

"Anyway it's not my or your business, it's up to them to make this decision, I wouldn't like anyone to express their opinion on my future decisions so I don't do it for anyone. I really don't know what will happen."

Lazio's Antonio Candreva said the Argentina game is an important test for Italy.

"The coach asked us yesterday to play a great match, we want to play it well even if it's a friendly match," Candreva said.

"Our recent results against South American teams aren't good, in spite of the performances in the Confederation Cup, so it will be an important match for us."