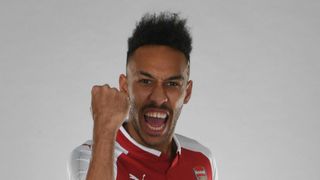 Transfer deadline day got off to a slow start on Wednesday, but the completion of Arsenal's purchase of Pierre-Emerick Aubameyang could spark a number of further moves.

Borussia Dortmund confirmed Aubameyang's price was €63.75million, while Arsenal announced the striker had joined on a long-term contract of unspecified length for a club-record fee.

Aubameyang's move to Arsenal is likely to be the catalyst for a merry-go-round of strikers across the continent, with Olivier Giroud likely to be allowed to make the switch to Premier League rivals Chelsea.

Antonio Conte has been seeking attacking reinforcements throughout the transfer window, with a host of names - including Fernando Llorente, Edin Dzeko, Andy Carroll and Ashley Barnes - all being linked.

And if Giroud switches across London to Stamford Bridge, the circle could then be completed by Michy Batshuayi making a loan move to Dortmund as a temporary replacement for Aubameyang.

Elsewhere in London, Lucas Moura has reportedly passed a medical ahead of an expected £25m move from Paris Saint-Germain to Tottenham, but neither club has yet given any details about that transfer.

PSG could allow Javier Pastore to leave too, with the Argentina international keen on a switch to Inter, who may let Marcelo Brozovic go out on loan.

Mahrez to force through Leicester departure?

The biggest deal of the day may yet involve Manchester City, who broke their transfer record to land Aymeric Laporte from Athletic Bilbao on Tuesday, paying £57m for the defender.

But Leicester are loathe to sell their star man from the 2015-16 Premier League title season and are reportedly holding out for a massive £70m fee for the Algerian. Could City break their transfer record two days in a row?

Fischer on the move again

While clubs are putting the pieces in place for massive deals, some smaller transfers have gone through in the early hours of transfer deadline day.

Copenhagen's capture of Danish international Viktor Fischer is one of the biggest of the day so far, with the former Middlesbrough man leaving Bundesliga side Mainz.

Fischer was once considered one of the hottest prospects in European football, but the 23-year-old still has time to fulfil his undoubted potential.

Swiss champions Basel have also made a move, bringing in Leo Lacroix on a loan deal from Saint-Etienne until the end of the season.

Albania forward Armando Sadiku has left Legia Warsaw to join LaLiga strugglers Levante, while Turkish giants Galatasaray have confirmed they are in talks with Inter over a deal for Japanese full-back Yuto Nagatomo.

But more major action, which could involve Giroud, Batshuayi, Lucas and Mahrez all being on the move, is likely to come later in the day.