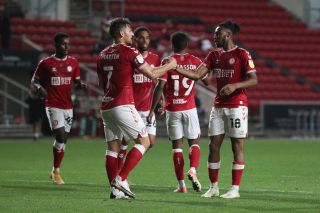 Dean Holden reflected on the impressive start to his spell as Bristol City manager and insisted: “We are still nowhere near where we want to be.”

But after seeing two goals from Kasey Palmer and one each from Chris Martin and Antoine Semenyo destroy League One opposition in a 4-0 win over Northampton, Holden was in no mood to rest on any laurels.

“Some of our football in the second half was a joy to watch,” he said. “But we were sloppy at times at set-pieces and there is still so much to work on.

“We go to Stoke in the Championship at the weekend and I want four wins out of four games. It is a very important match for us after the good start.

“I won’t be thinking about Aston Villa in the next round of the Carabao Cup until the Stoke game is behind us.

“We had to be patient tonight and our passing let us down at times in the first half. But the second goal came at a good time just after the break and that enabled us to play more incisively.

“There is a good atmosphere building in the dressing room and we have some momentum, which is what you need to be successful. But we have to maintain it.”

Martin’s first goal for City, a close-range header, put them in front with 43 minutes gone and soon after the break Palmer rounded goalkeeper Jordan Mitchell to slot the second.

Young striker Semenyo crowned an impressive display by shooting the third after 82 minutes and Palmer fired home from close range near the end.

Northampton boss Keith Curle was able to smile after the drubbing.

“We had eight injuries, three academy players involved and shuffled the pack, yet for an hour I was really pleased,” he said.

“The lads took on board what I had told them. We knew we had to try and frustrate Bristol because they have very good Championship players and we showed good discipline with our shape.

“For an hour we nullified most of their threats. The game was a great learning curve for our young boys.

“They have seen the standards set by good Championship players, who move the ball quickly. They know where the next pass is going and they are clinical when they get inside the box.

“I am trying to be protective of our squad because the league is our main priority as we look to consolidate in a higher division.

“So, having had eight players out and rested four more, I was delighted to see us go out and compete as we did.”