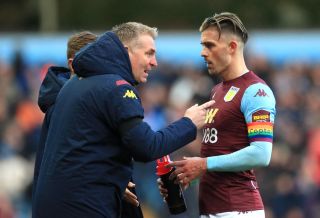 Dean Smith has promised Aston Villa fans the club’s owners will be doing everything in their power over the next few months to keep hold of captain Jack Grealish.

Despite the closure of the January transfer window, it has not stopped the continual flood of speculation regarding a summer move for Grealish, with Manchester United apparently leading the chase.

While it is almost inevitable the 24-year-old will leave if Villa are relegated, should the club retain their Premier League status, then the onus will be on co-owners Wes Edens and Nassef Sawiris to convince the midfielder to stay, and not to have his head turned.

Asked to offer any kind of guarantee to the fans Grealish will remain, boss Smith said: “I’ve said many times we’ve two magnificent owners who want to be successful at this football club, and they’ve an awful lot of money, which they’ve collected from their hard work in their businesses.

“If you want to be a successful team you have to keep your best players, and they will be working very hard to ensure our best players stay at this football club.

“That’s probably the best answer I can give the fans.”

Grealish will again aim to be Villa’s inspiration when they face Jose Mourinho’s Tottenham at Villa Park on Sunday, with Smith’s side in relegation trouble.

Spurs provided the opening-day opposition on Villa’s return to the top flight, conceding two goals in the final few minutes to suffer a 3-1 defeat after taking the lead.

Smith insists his side is now far removed from the one that faced Spurs that day.

“I knew it would be a tough season,” reflected Smith.

“Going into it you want to be the team like Sheffield United are at the moment, with their squad three years in growth and playing together. We had a big change at the end of last season when we were promoted.

“I suppose with the Tottenham game, as the first match of the season, I was really excited about it. I was also not sure what we would get from us, given the quality of the opposition, and how we would deal with it.

“I saw enough on the first day, although I was disappointed with the performance.

“There were a lot of people who credited our performance, saying things like ‘They won’t be in trouble if they play like that’, but I thought we gave away too many chances.

“It was a great awakening for the players, to realise the quality they would come up against week in and week out, and they learned an awful lot from that.

“Moving forward, we’re in a totally different place from where we were on that first day.”