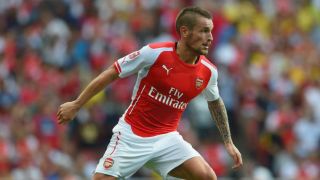 Out-of-favour Arsenal defender Mathieu Debuchy says he needs to leave the club during the current transfer window amid interest from Aston Villa and Bayer Leverkusen.

The France international has fallen down the pecking order at the Emirates Stadium, having lost his place to Hector Bellerin following a long-term shoulder injury sustained last season.

The former Newcastle United full-back has made just seven appearances in all competitions this term and says a move away, be it a loan or a permanent transfer, is needed ahead of the European Championship this year.

Asked by L'Equipe about interest from rock-bottom Villa, Debuchy said: "It's true, they are among the teams seeking me. I'm currently studying everything but it's not a possibility I have excluded.

"Whatever happens, even if it is to return [to Arsenal] this summer and then start again, I have to go this winter. I can not stay at Arsenal.

"[Villa's position] makes you think. This is also why I take my time before deciding. On the other hand, it can also be a great challenge. While they are currently in difficulty, Aston Villa is one of the major English clubs. This is also why I do not rule out this possibility.

"[The interest from Leverkusen] is true and it may interest me too. The most important thing is to play in an attractive league."

Debuchy faces competition from Bacary Sagna and Christophe Jallet at right-back in France's squad for the Euros in June and July, the 30-year-old having struggled to feature regularly during friendlies following the World Cup in 2014.

"As the weeks go by, we get closer to the Euros. I have to play to try to return as soon as March for the Netherlands and Russia friendlies," he added.

"I clearly lost six months. I would have preferred to leave last summer but the coach [Wenger] told me that I would have my chance. Ultimately, it was not the case.

"I do not know who is responsible. Last year I got injured, I've been away a long time and Bellerin had some good matches. This summer, I had a good preparation and I was able to resume the season as the regular but the coach decided otherwise.

"That's competition, do not worry. This is football. But it was very hard, I went through difficult times. This is the first time I find myself in this situation. Playing a match every two months - that's not possible.

"I do not know in what condition I am. In my position, you must defend and attack. If you played me tomorrow, I do not know if I could last the whole game. That's why I can not stay in this situation."