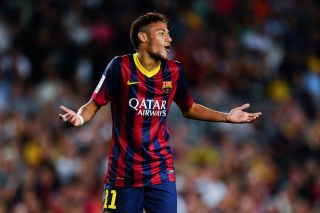 Playmaker Neymar, 21, joined Barca from Santos in June in a deal believed to be worth €57 million.

The gifted Brazil international has drawn comparisons with team-mate Messi and Real Madrid star Ronaldo, who are widely regarded as the two best players in the world.

And Deco, who was born in Brazil but opted to play for Portugal, believes Neymar has what it takes to become one of the greats.

"He has the potential for it, for sure," Deco told Mundo Deportivo.

"But it is a long way off. Talk about Messi, (Andres) Iniesta and Cristiano is easy because they have already grown and have arrived.

"Football is not only about quality, you have to grow."

Messi won has won the last four Ballon d'Or - the award given to recognise the best player in the world - titles, with Iniesta finishing in the top three twice.

Deco, who played with 2005 winner Ronaldinho during his time at Barca, thinks the brilliance of Messi and Ronaldo prevents Spain midfielder Iniesta from being truly appreciated.

"Andres is phenomenal," he added.

"What happens is you have Messi that obfuscates the media with his greatness. But for those of us from within football, Iniesta is brutal.

"He deserves it (the Ballon d'Or). The problem is he has two animals in front of him in Leo and Cristiano. It is difficult, because Cristiano is another beast."