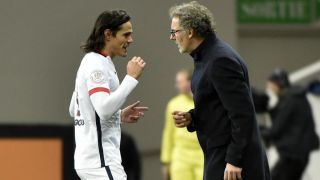 Blanc conceded earlier this month his tactical system does not benefit the Uruguay international, who came on for the last 20 minutes of the 5-1 Ligue 1 win at home to Angers on Saturday.

The former France captain confirmed a meeting was held during PSG's mid-season training camp in Doha in which elements of Cavani's behaviour were discussed, which has further prompted talk that he is looking to force a transfer away from Parc des Princes.

Yet Blanc is adamant he has always sought to deflect criticism away from the 28-year-old and is ready to put him in the side to face Toulouse in the Coupe de la Ligue semi-final on Wednesday.

"He's a boy who I like, like all the other players, who I've defended to the hilt because he's been questioned for the last two years," Blanc told a media conference.

"Football is a team sport: you cannot do what you want. You have to be aware of that. Edinson is a generous boy, a team player on the pitch, I never have to reproach him. In the life of the group, however, he has not done what he should. I hope he knows that. He has every chance of playing tomorrow."

One player who has benefited from Cavani's reduced playing time is Lucas Moura, who scored one and set up another against Angers to continue his excellent recent form.

And Blanc hopes to see the Brazilian kick on in his development after some inconsistent form for the French champions to date.

"He's a talented player who was not able to exploit all of his qualities," he said. "He's going through a better period, he's scoring goals. Yes, we spoke a lot, we worked individually with him.

"He has exceptional quality, his speed, he supports very well, he's very quick. But he wasn't aware of certain things. He had the impression that his speed had to serve him when he had the ball. I tried to explain to him that he has to use that same quality without the ball.

"We tried to give him exercises, we made a video for him. It's true that he's been better. He must continue working, he can still develop."

Blanc also hit back at critics who have claimed Ligue 1 is too easy for his side, who are 21 points ahead of second-placed Monaco.

"They could have made this comment on the championship in Germany two years ago," he added. "Yes, there's a big gap. PSG are the champions. I think it's others who aren't doing what they should."