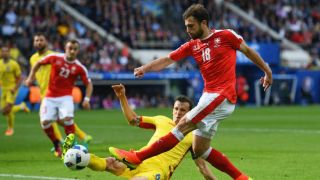 Switzerland forward Admir Mehmedi felt he proved a point to his critics with superbly taken equaliser in the 1-1 Euro 2016 draw against Romania.

Vladimir Petkovic's team found themselves behind after captain Stephan Lichtsteiner grabbed a handful of Alexandru Chipciu's shirt and Bogdan Stancu converted from the penalty spot for a second match in succession.

Granit Xhaka's slick control of midfield and Romania's stout defensive approach meant Switzerland had much of the play thereafter and Mehmedi rewarded their persistence by smashing home on the volley after Ricardo Rodriguez's 57th-minute corner was partially cleared.

The Bayer Leverkusen man came under scrutiny following Switzerland's disjointed showing in the 1-0 Group A win over Albania but he was in defiant mood when he spoke to reporters at the Parc des Princes on Wednesday.

"I don't know, maybe you guys want to see a spectacle, but if you analyse the game from a coaches' perspective or from a football expert's perspective you would see what I am doing for the team," he said.

"I prefer to do everything for the team and hope that we win, instead of scoring a goal myself.

"I feel a lot of support from my teammates and that's important. I feel trust from the coach also."

Lichtsteiner might have been more relieved than most to see Mehmedi crash his unstoppable strike into the top corner and the Juventus full-back said Switzerland's goalscorer had no need to get on the scoresheet to prove his worth.

"I wouldn’t say he wasn't good before his goal," he said. "He worked a lot, ran a lot. He deserved to score the goal.

"I am happy that we finally made the goal, because we created so many chances, you have to score the goal then."

Switzerland take on group leaders France to complete their round-robin phase in Lille on Sunday, second on four points following back-to-back victories for the hosts.

Lichtsteiner added: "We have a good chance for the next round now. With the four best third-place sides going through and stuff it's quite okay."