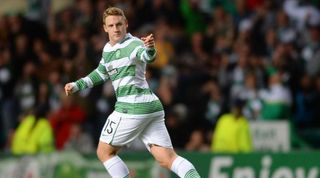 Commons has been a revelation since joining the Scottish champions from Derby County in the 2011 January transfer window.

The 31-year-old scored 32 goals for the Glasgow giants last season in all competitions, but his appearances have been restricted due to injury in the current campaign.

Commons is in the final year of his contract and has been linked with a move in January, as Premier League sides Leicester City and Crystal Palace reportedly weigh up bids to take him back to England.

And Deila is in the dark as to whether one of his prized assets will remain at the club after he was offered a new deal.

He said at a press conference: "This is always played through the agent and the club, and it's about money, it's about length and a lot of things. And what the options are for us and him.

"We just have to keep driving the process and see where we're going with it.

"I've been told they now have to get back to us on what we've offered them."