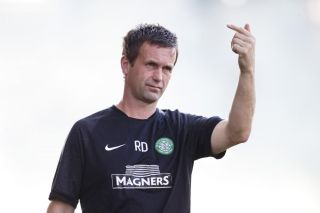 Celtic had floundered in the third round of qualifying against Legia Warsaw and slumped to a 6-1 aggregate defeat, only to earn a reprieve after the Polish champions were punished for fielding an ineligible player.

Bartosz Bereszynski's late introduction in Wednesday's second leg at Murrayfield caused UEFA to remove Legia from the competition as the player should have been serving a three-match ban.

Having been put back into the competition for the play-off round on Friday, Celtic were hours later handed a tie with Maribor of Slovenia to earn a place in the group stages.

Reports had suggested that Celtic's elimination could make it hard to attract new players and keep hold of goalkeeper Fraser Forster, who has been linked with Southampton, meaning news of the club's Champions League lifeline was well received by Deila.

"The players want to play in the Champions League," he said a media conference.

"It looks like we have been given another chance and I think it will be no problem to get the players up for the game.

"We are working really hard now to get players in for the next stage.

"Of course, there are many aspects of keeping players and getting players in but that [Champions League football] is one of those aspects.

"It is a vital thing. It will lift the team and performance."

"It's very strange," he added. "I feel very sorry for Legia.

"That is what UEFA said, we haven't been involved in anything. I am a football manager and I have to go with it and now we are preparing for Maribor."