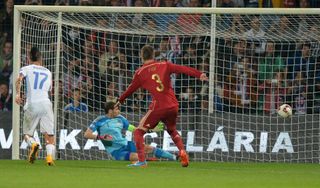 Reigning European champions Spain fell behind in the 17th minute in Thursday's Group C clash in Zilina when Casillas was beaten straight down the middle by Juraj Kucka's long-range strike, despite it seemingly being a comfortable save.

Substitute Paco Alcacer thought he had earned Spain at least a point with eight minutes on the clock with his second international goal in three senior appearances, but Miroslav Stoch consigned Spain to their first qualifying defeat for any tournament since October 2006 when he nodded home an 87th-minute winner.

Casillas' misjudgement is his latest in a difficult 2014 that included a series of errors in Spain's woeful World Cup defence and head coach Del Bosque has faced calls to drop his skipper in place of David de Gea, who has been in impressive form for Manchester United.

Del Bosque opted not to publicly criticise the Real Madrid goalkeeper, though, and stated that the defeat can be attributed to the surprises that football often produces.

"Casillas had saved good chances from Slovakia previously," he told reporters. "I didn't see it clearly but the ball moved strangely and tricked Iker.

"This is football. We cannot fault players. We showed patience to move the ball but lacked accuracy and their goalkeeper played well.

"Nobody likes to lose but nobody can say we lacked effort or attitude. We lost due to circumstances of football."

Del Bosque also defended striker Diego Costa, who has now failed to score in six appearances for Spain since switching allegiance from the country of his birth Brazil.

He added: "Costa is very enthusiastic and putting in effort.

"As well as his performance we are happy with his commitment."