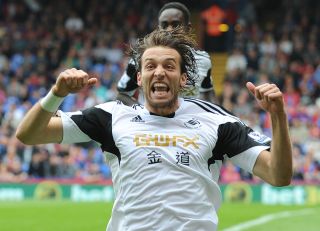 The 27-year-old, who scored 18 goals in 35 Premier League appearances last season, has been drafted in as a replacement for the injured David Villa for the FIFA World Cup qualifiers against Belarus and Georgia.

Del Bosque has been impressed with Michu's attitude and application so far in training and conceded that the former Rayo Vallecano and Celta Vigo forward can count himself unlucky to have been overlooked by Spain until now.

He said: "An international manager should try to be active picking some players up for the team.

"Sometimes we have to say sorry because we weren't active calling Michu because the first impression is really good.

"Maybe we haven't been active bringing him up but sometimes it depend on the circumstances because we have a lot of players who are starters for us and we just can pick up 23 players.

"But the first impression is really positive and we are happy all the normality we are getting from the new players coming. We are really glad about that."

Spain top Group I from France in World Cup qualifying ahead of Friday's clash Belarus.

Two off-field issues that have hit the headlines in the build-up to the game have revolved around Del Bosque reportedly being primed for a new deal, and on Brazil-born striker Diego Costa confirming he wants to switch allegiances to play for Spain.

Del Bosque, though, is only concerned with preparing to face Belarus.

He added: "Look I am not saying we should forget Diego Costa's issue because it is true he is on the news but we should be focused on (the Belarus) match and we have to be realistic because we haven't done anything at the moment.

"We are facing a great team and well organized side.

"We will see what is going to happen with Diego Costa.

"It is true when we spoke to him (in a lunch) a few days ago we realised he is a good boy and he has all the requirements to be Spanish player."