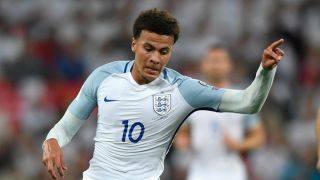 England have called up Dele Alli for the final round of World Cup qualifiers, despite the Tottenham midfielder potentially facing a ban.

Alli is the subject of a FIFA probe after he was caught on camera raising a one-fingered salute during England's 2-1 win over Slovakia at Wembley earlier this month.

Amid suggestions his gesture was aimed at referee Clement Turpin, Alli explained that it was in fact directed towards his former Spurs team-mate Kyle Walker.

England boss Gareth Southgate corroborated Alli's version of events immediately after the match, but admitted on Thursday that he ran the risk of appearing "a shambles" if the Spurs man has to miss out.

"We have not heard anything at the moment from FIFA on Dele Alli. We run the risk of being a shambles because he might have to be withdrawn. We hope common sense prevails," he said.

"We have given our side of events, Dele has given his, we have to see what happens next.

"I have had a good chat with Dele about different things, he is disappointed to miss football. He recognises the responsibility and we still have to qualify. We hope to have him available.

"Old people make mistakes, so young people will do. Hopefully something like that will not happen again."

Fabian Delph and Fraser Forster have earned international recalls for the fixtures against Slovenia and Lithuania. England need to win either match in order to guarantee qualification for Russia 2018.

Forster returns to the fold after missing out on the last squad as a replacement for the injured Tom Heaton, while the last of Delph's nine caps came in November 2015 against Spain.

The Manchester City midfielder has worked his way back into Pep Guardiola's first-team plans this season and looks set for an extended stint in the team, albeit at left-back, after Benjamin Mendy's injury.

Here it is – the squad for our last two qualifiers.Find out more about who's in: September 28, 2017