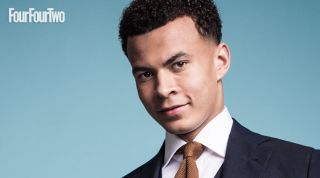 The 20-year-old has shot to prominence since arriving from MK Dons, scoring 10 league goals last term on top of being named PFA Young Player of the Year.

Dele has continued on his upward trajectory in 2016/17 – netting his 15th goal of the campaign against Stoke on Sunday – as Pochettino’s side look to secure automatic Champions League qualification for the second season running.

And the midfielder has hailed the Argentine’s man-management skills and strong work ethic as he attempts to deliver Spurs a first trophy since the 2008 League Cup.

Speaking exclusively in the April 2017 issue of FourFourTwo magazine, the cover star says: “I owe him a lot of thanks for the way he’s helped me to settle in, and for the opportunities he’s given me. Everyone trusts him and wants to work for him.

“You can't get complacent. Sometimes you take your foot off the pedal a little bit, but he is always there to make sure you know that everyone is fighting for a place, and that it’s just as easy to come out of the team as it is to get into it. He wants you to give 100 per cent all of the time. He wants the intensity that you see us playing with in matches all of the time.”

The Tottenham players’ affection for their manager is often reciprocated on the sideline in the form of bear hugs and slaps on the back from the 44-year-old. However, Dele admits the former Newell's Old Boys, Espanyol and PSG defender has got a dark side, too.

“He can switch,” Dele laughs, almost nervously. “You don’t want to get on the wrong side of him. He’s showed me and Eric [Dier] clips of him when he was playing at Espanyol: some were of him scoring goals, some others were of him clattering people.”

Read the full interview with Dele Alli in the April 2017 issue of FourFourTwo magazine. Featuring some of the best young players in the world, we also meet up with Bayern Munich whiz kid Joshua Kimmich on his birthday and check in with Borussia Dortmund youngsters Christian Pulisic, Julian Weigl, Raphael Guerreiro, Ousmane Dembele and Alexander Isak. Plus, we speak to Ademola Lookman about making the jump from League One Charlton to Premier League Everton, profile 18-year-old Milan goalkeeper Gianluigi Donnarumma – who’s already the heir to namesake Buffon as Italy’s No.1 – and wonder whether Ravel Morrison will ever fulfil his potential. Elsewhere, Newcastle Enfield entertain Sunderland RCA in the ‘other Tyne-Wear derby’, Colchester keeper Dean Brill reveals the unglamorous reality of a deadline-day transfer and we go One-on-One with Damien Duff. Order it now, then subscribe!