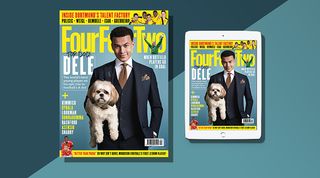 Get your hands on the latest edition of FourFourTwo magazine – available in print and on iPad and iPhone – from Wednesday, March 1

Here are some of the questions we asked ourselves during the making of this issue of FFT: how do you get a dog to pose for the camera? What’s the German word for space hopper? Why is it so hard to get hold of a proper birthday cake in Bavaria? And, of course, who’s the best young footballer in the world right now?

We didn’t have to go far to find the answer to this final question. In the 12 months since we last chatted to Dele Alli, the Spurs midfielder has gone from being the hottest prospect in England to the most talked about young player in the world.

Not that it’s all been plain sailing. In his exclusive interview, Dele talks about the pain of missing out on the Premier League title, being ‘targeted’ by defenders and coping with the trauma of having all of his trainers destroyed by his dog, Hugo.

We also travelled to Germany, where the Bundesliga’s big two clubs are planning ahead. We rocked up in Munich to speak to Bayern’s Joshua Kimmich, on his 22nd birthday no less, while Borussia Dortmund introduced us to their new crop of youngsters aiming to conquer the world. If the chemistry between the players during our interview is anything to go by, Dortmund’s future is in good hands.

Second season syndrome? Forget it. In the 12 months since we last spoke, Dele has gone from England’s hottest prospect to the most talked about young player in the world. The only thing that can stop him now – someone chewing up his boots.

On the day Kimmich turned 22, FFT lit the candles and asked how it feels to be Philipp Lahm’s heir. There’s no need to make a wish when your future’s this bright.

We profile the Serie A stopper who is already considered to be Gianluigi Buffon's successor as Italy's No.1, even though the glovesman has only just turned 18.

Three years ago, Ademola Lookman was playing Sunday League football. Now, aged 19, the Everton youngster has already put Manchester City to the sword, and the adventure has only just begun. We catch up with the Toffees' new signing.

It’s fun to be a young player at Dortmund right now, and with good reason – the German club are gathering the world’s finest talent and giving them the platform to impress. FFT drops in to find out more about the new kids on BVB’s block.

Back in 2011, Ravel Morrison was the star of a Youth Cup-winning Manchester United outfit that also featured Paul Pogba. So how come the Frenchman has just cost £90 million, while Morrison’s just been sent out on loan to the Championship?

The realities of last-minute moves for Football League players and their loved ones is a world away from the hullabaloo of Jim White and the Sky Sports cameras. Finding a new house, job for the wife and school for the children can be tough.

When outfield players go in goal

It’s one of the greatest sights in football – when an outfield player is forced out of his comfort zone and into the firing line. But how do they cope with the pressure, where do they often go wrong... and why do they never tuck their shirts in?!

New research has revealed heading could endanger the long-term health of football players. FourFourTwo finds out if the game has got an underlying concussion issue and how it could affect both current and former stars.

With Dutch legend Marco van Basten suggesting we do away with penalties and the offside rule, FFT revels in a history of half-baked ideas that didn’t catch on.

The Tyne-Wear derby, but not as we know it

While it might not have the same draw as the Premier League blockbuster, Newcastle Benfield vs Sunderland RCA in the Northern League still matters.

Former Blackburn and Chelsea winger Damien Duff answers your questions in this month's One-on-One, including: Would Chelsea of 2017 beat Chelsea of 2005? Did Mourinho really hide in a basket? And is he starting to turn into Kim Kardashian?

Nice defender Dante opens up about Mario Balotelli, Pep Guardiola and Brazil's infamous 7-1 defeat to Germany. Plus, Lee Sharpe talks FFT through his greatest goal, Alessandro Costacurta remembers the games that changed his life and former Leicester skipper Matt Elliott reveals why he kept budgerigars as a kid.

Rory Smith focuses on fake news in this month's Talking Point, and how the President of the United States, Donald Trump, has copied football's trick.

For one match in 1971, Man United played a ‘home’ game at bitterest rivals Liverpool – setting the tone for much of the 1970s’ terrace terror that followed.

FourFourTwo Performance speaks to Man United's footloose forward Jesse Lingard, who’s got advice on how to leave defenders in a spin. Plus, Pierre van Hooijdonk offers his tips on how to score direct free-kicks and Seattle and USA forward Jordan Morris explains how he refuses to let diabetes affect his game.

Grab it now: available in print and on iPad and iPhone from Wednesday, March 1. Subscribe to FourFourTwo here!