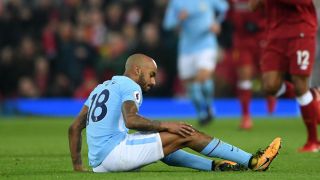 Manchester City manager Pep Guardiola confirmed Fabian Delph is likely to be out "for a while" with a knee injury as he counted the cost of Sunday's 4-3 defeat at Liverpool.

Reds midfielder Alex Oxlade-Chamberlain and City winger Leroy Sane traded well-taken first-half goals before the Premier League leaders collapsed under the weight of a relentless Liverpool attack and their own defensive profligacy.

Roberto Firmino, Sadio Mane and Mohamed Salah were all on target during a dizzying nine-minute spell in the second half before substitute Bernardo Silva and midfielder Ilkay Gundogan gave City belated hope.

Delph's departure came long before the contest reached boiling point after he turned his knee in a sliding challenge on Oxlade-Chamberlain.

The England midfielder has been reinvented as a left-back under Guardiola this season – a role he was pressed into when close-season arrival Benjamin Mendy suffered a ruptured anterior cruciate ligament injury.

Right-back Danilo replaced Delph and looked uncomfortable on the opposite side of the defence as Liverpool made hay.

Ukrainian youngster Oleksandr Zinchenko has performed creditably at left-back during domestic cup matches this season but, given he is also a midfield convert, it leaves Guardiola short in that position as speculation over his January transfer activity centres upon the Alexis Sanchez saga.

"He will be out, I think, for a while," the former Barcelona boss told a post-match news conference.

"I don’t know if it will be a lot of time but he will be out for a while.

"It is his knee, he turned his knee."

City's ambitions of becoming the second team in history to go an entire Premier League season unbeaten were left in tatters at the 23-game mark and Guardiola felt his side failed to deal with a raucous and baying Anfield crowd.

"In the second half we started really good," he said. "We played 10 or 15 minutes really good until the goal from Firmino.

"After that we lost a little bit of our control. We were involved in the environment of Anfield for many, many reasons.

"You have to try and be stable. It's especially a big lesson for the knockout stages in the Champions League.

"But we were still fighting and still trying and found two goals. It's our first defeat – you need to live that kind of situation to realise what we have done so far and what we are expecting for the future."