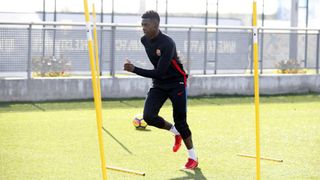 Ousmane Dembele is set to make his first Barcelona appearance since September after being named in the squad for Thursday's Copa del Rey tie against Celta Vigo, but Lionel Messi and Luis Suarez have been rested.

Dembele, Barca's record signing after joining from Borussia Dortmund for an initial €105million in August, tore his hamstring in a LaLiga clash with Getafe - his third outing for the club - and has not played since.

Ernesto Valverde was non-committal regarding the 20-year-old's chances of playing against Celta in his pre-match news conference, but the France international could be in line to start in the absence of Messi and Suarez, with Paco Alcacer also omitted.

Jose Arnaiz may get a chance to impress after being included in the squad, while Samuel Umtiti continues to miss out through injury amid reports Manchester City are considering triggering his €60million release clause.