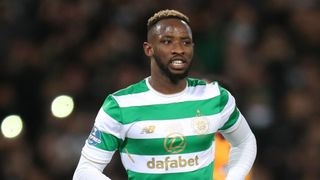 Reports over the festive period indicated the 21-year-old was close to joining Brighton, with Celtic boss Brendan Rodgers accepting he could not guarantee the striker's future.

Dembele hit 17 Scottish Premiership goals last season to build a reputation as one of the hottest young strikers in Europe, with Real Madrid and Chelsea listed among his potential suitors.

But Dembele has been less prolific in a campaign disrupted by a hamstring injury, scoring only four times in the league in 2017-18, although Celtic are still on track to collect yet another title.

Brighton sit 12th in their first Premier League season but have struggled for goals, with their haul of 17 league strikes only bettering the bottom two sides, West Brom and Swansea City.

But Hughton, speaking ahead of Monday's FA Cup tie with rivals Crystal Palace, brought an end to rumours Dembele would be presented as a solution to Brighton's problems in front of goal.

"There's been huge speculation, certainly on this particular one," Hughton told reporters regarding Dembele.

"There were certainly some quotes going back a little while ago about figures and about some communication between the two clubs.

"Categorically, there hasn't been any communication between the two clubs. Hence he is a name, along with lots of other names.

"[The Dembele reports are] pure speculation. If I look at players that we might have an interest in then there would be numerous names and of course this is one name that's consistently been linked, but there could be numerous other names."

Chris Hughton confirms that he has no fresh injury concerns ahead of Monday evening's tie.January 5, 2018

Hughton also dismissed claims Brighton could sell centre-back Lewis Dunk, who has been tipped for an England call-up after impressing in the Premier League this season, with pundit Garth Crooks having suggested Liverpool should pay £45m for the defender to partner Virgil van Dijk.

"That would be a huge surprise to me," Hughton added. "Lewis has been magnificent for us in my period of time here. He's improved each season as a player.

"We have an owner and a chairman who has resisted any temptation for him to not be here in this period of time. I fully expect him to be a Brighton player come the end of January."