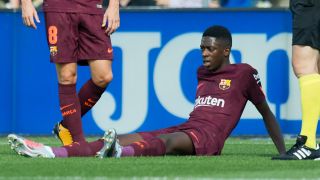 Ousmane Dembele could make his first Barcelona appearance since September after being named in the matchday squad for Thursday's Copa del Rey tie against Celta Vigo.

Dembele - a €105million August arrival from Borussia Dortmund - has not played for Barca since tearing his hamstring on his third appearance for the club, against Getafe in LaLiga.

However, the France star is among the substitutes in what is a welcome boost to head coach Ernesto Valverde's attacking ranks.

Lionel Messi and Luis Suarez have both been rested, with captain Andres Iniesta among the other players who did not travel, while Paco Alcacer and Samuel Umtiti are injured.

Jose Arnaiz is given a chance to impress in an attacking role in the absence of Messi, Suarez and Alcacer.

Ter Stegen joins Dembele on the bench, as do Javier Mascherano, Ivan Rakitic and Jordi Alba.