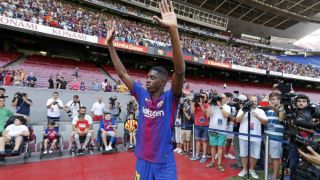 Ousmane Dembele has been named on the substitutes bench for Barcelona's derby clash against Espanyol.

The 20-year-old joined the Spanish giants last week in a five-year deal worth €105million as Barca sought to replace Neymar following the Brazilian's €222m switch to Paris Saint-Germain.

But coach Ernesto Valverde resisted the temptation to throw the new man straight in, selecting Gerard Deulofeu alongside Luis Suarez and Lionel Messi in attack.

Dembele could make an impact from the bench as Barca look to take advantage of Real Madrid's failure to beat Levante earlier on Saturday.

Barcelona have won both their LaLiga games so far this season 2-0 and will hope to cruise past Espanyol, who have only registered a point from their opening two games.