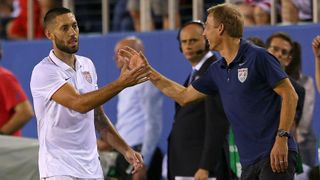 Jurgen Klinsmann wants to see some new blood up front after leaving veteran Clint Dempsey out of his squad for upcoming World Cup qualifiers.

Dempsey, the second-leading scorer in USA history, is not in the 23-man roster for next week's fixtures against St Vincent and the Grenadines and Trinidad and Tobago.

While 32-year-old Dempsey awaits more formidable competition, Klinsmann will choose from a group of forwards that includes Bobby Wood (22), the breakout star in a pair of European friendlies and Stanford's Jordan Morris (21).

Those two are among 10 players who will be experiencing World Cup qualifying for the first time.

"At this point in time, I want to give the younger strikers a chance to prove themselves and this is a good stage to do it," Klinsmann told US Soccer.

"I communicated with Clint about it and it's all fine."

Despite Dempsey's absence, there are plenty of seasoned players to lead the way.

Everton goalkeeper Tim Howard, who recently returned from a year-long sabbatical from international play, and midfield stalwarts Michael Bradley, Jermaine Jones and Kyle Beckerman along with forward Jozy Altidore are in the squad.

USA will face St Vincent and the Grenadines on November 13 in St Louis and Trinidad and Tobago four days later in Port of Spain as the road to Russia for the 2018 World Cup begins.