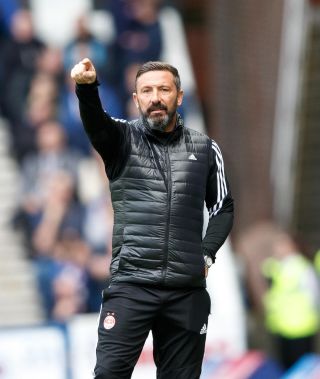 Ferguson was back in Aberdeen starting line-up after serving a two-game ban and proved to be the difference against his former side with the only goal in the first half.

And McInnes claims the 20-year-old is the complete midfielder who can “do everything” as Aberdeen bounced back with a vital win following their four-goal mauling by Celtic on Sunday.

“Lewis has come up with the all-important goal,” McInnes said. “He can do everything, wherever you ask him. The first game we played against Burnley, we had him and (Graeme) Shinnie playing off Sam Cosgrove and I still think that’s where I see him.

“Lewis has the desire to get up and down the pitch, like Shinnie. We were hoping that for him and Bryson today. Fergie has been a huge player for me and it’s great to have him available.

“He plays on that edge sometimes with the aggression that I need from my players.”

McInnes was relieved to have a game so quickly as they got the 4-0 defeat to Celtic out of their system.

He added: “Sunday was very sore for us all but I was pleased with the game coming so quickly.

“It was all about trying to focus the players – we knew we had to get a bit of momentum. We’re a long way off the Old Firm at the minute but I still feel we can be a very competitive team and win games.

“There were loads of positives from the Hibs and Motherwell game then Celtic arrive and give us a belt in the mouth.

“We’re a good bit away from taking Celtic on at the minute but we can keep picking up three points.

“We’re only 10 league games into the season so it’s still early for making any rash decisions.”

Hamilton head coach Brian Rice insists there were plenty of positives in his young side’s display despite the defeat.

Rice said: “It is disappointing to lose a goal from a set-play.

“We had to change the team at the last minute as Brian Easton pulled out and Jamie Hamilton came in and he was fantastic.

“We were always in the game and everything we didn’t do Saturday, we did tonight.

“We had a young team who hadn’t played together but they showed they are maturing but we are disappointed to lose.

“The lads are disappointed but the positives are if the young lads can gel and get more experience it bodes well for the club.

“We will look to bounce back on Saturday against Ross County.”