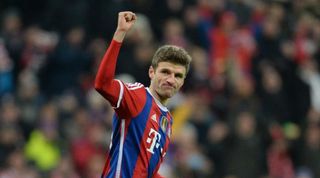 Bayern are seeking to become the first club to win the competition three years in a row, having not lost in it since the 2012 final.

But if second-tier Braunschweig were hoping the hosts - who have scored 18 goals in their last three Bundesliga games - might allow complacency to creep in, Muller had a stark warning.

"It will never happen that we do not go with the right attitude in a game," he said. "We have to start from the first minute, what I expect from us.

"We have been through so much and know what it is. We remain self-critical.

"There are no second chances in knockout games."

Indeed, Bayern's first two matches in the Pokal have underlined their desire to retain the trophy, with Pep Guardiola naming strong line-ups and seeing his side score seven goals in those fixtures.

The champions' form in the Bundesliga has been ominous since the five-day blip that saw them lose to Wolfsburg and draw with Schalke in late January and early February.

Four games since have yielded 12 points, with Hamburg hammered 8-0 at the Allianz Arena and Paderborn going down 6-0 on home soil.

In stark contrast, the visitors - who sit sixth in the second tier having been relegated last season - are winless in four, scoring only three times in that spell.

Braunschweig's progress in the Pokal has been hard-earned, with this tie their third consecutive away draw.

Victories at Oberliga leaders Bremer and Regionalliga Bayern table-toppers Wurzburger Kickers have come courtesy of a solitary goal, with Havard Nielsen the scorer on each occasion.

Bayern won both matches between the two sides last season 2-0, though Guardiola will be without captain Philipp Lahm (ankle), Thiago Alcantara (knee) and Mehdi Benatia (thigh) this time around.

One man recently back from injury, Holger Badstuber, feels he is getting close to the peak of his powers again.

The defender returned in the thrashing of Hamburg in mid-February and is looking forward to getting more game time under his belt.

"I feel good," Badstuber said. "I still need patience until I'm back to the level where I see myself. I am on a path."