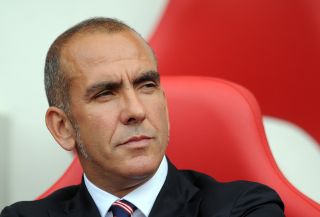 The Italian had just left a planning meeting for the approaching Premier League clash after midnight at the Solent Hotel and Spa in Whiteley when he was abused by a group of people in the lobby.

No players were involved according to Di Canio.

In an attempt to avoid rumours about the incident, the former West Ham United forward gave his version of the events at his post-match press conference after Sunderland's 1-1 draw against Southampton.

"We have to clarify because I don't want speculation and big headlines," Di Canio said.

"At midnight, (the coaching staff and I) walked out from a meeting room with my staff and from the first floor we walked downstairs to take the lift to the third floor for bed; the players went to bed at 10 o'clock.

"Once we were close to the lift, we heard loud people shouting and I can't repeat any of it.

"Obviously their behaviour showed they were Southampton fans but, to be honest, I don't think they wanted to attack us physically.

"They were young, drunk guys there after a wedding party that was inside the hotel.

"I was screaming from behind the staff and we tried to push the third floor button and they tried to stop us."

Di Canio played down the seriousness of the incident and even recalled a light-hearted ending to the fracas.

"I don't have any problem because they are only young, they're drunk," Di Canio said.

"At the end (of the incident), there was a fun moment when (the Southampton fans) said 'we are going to win, Rickie Lambert is going to score'.

"Fabrizio (Piccareta, assistant manager) said, 'no, tomorrow we're going to win' and it finished like that.

"No footballers (involved) and no fight occured."