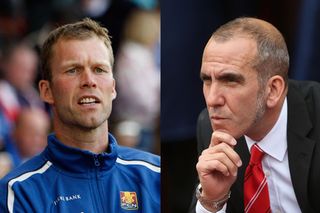 Celtic are looking for a new manager for the first time since 2010 after Lennon quit on Thursday and both Di Canio and Wieghorst, who were team-mates at the Glasgow-based club in the 1996/97 season, have expressed their interest in taking over.

Di Canio, who was sacked by Sunderland in September, recently declared he remains confident of his ability as a manager, while his representatives confirmed the 45-year-old Italian would be thrilled to return to Celtic.

"Paolo wants to get back into management and would seriously consider an approach by Celtic if there was interest," Di Canio's UK-based adviser Phil Spencer said on Monday.

"Paolo enjoyed his time at Celtic and the supporters loved him."

Di Canio's Italian agent Matteo Roggi added: "Paolo confirmed to me he would love to work for Celtic."

Di Canio played 26 league games during his one season with Celtic, scoring 12 goals.

By contrast, former Denmark international Morten Wieghorst made 86 league appearances, scoring 10 goals, and winning the league-cup double with Celtic in 1997/98.

Wieghorst also has arguably more experience as a manager, having coached Nordsjaelland in his native country for five seasons, winning the DBU Pokal twice.

The 43-year-old Dane was an assistant with Swansea under Michael Laudrup until the latter was fired in February.

Wieghorst has admitted any links to Celtic's number one job are purely speculation at this point but made it clear he would be keen.

"I am honoured to be mentioned in connection with Celtic," Wieghorst said.

"It is a great club and I enjoyed some fantastic times there. My feelings for Celtic are well-known and I have been back several times since I left.

"It is a massive club and I would be interested if I got a call. Glasgow was a fantastic place to stay for me and my family."