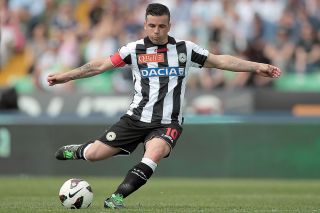 The veteran forward has written off both Milan clubs after just seven matches of the season, insisting that it will be a three-horse race for the league crown.

Roma top the table having won all of their fixtures so far, while Napoli and defending champions Juventus are also unbeaten, having posted six wins and one draw.

"I think the fight for the league will be between Juventus, Napoli and Roma," Di Natale told Gazzetta dello Sport. "They are the three teams that are stronger than anyone else."

Di Natale, who has scored at least 23 goals in his last four Serie A seasons, believes that his side's primary aim is to avoid relegation.

Udinese sit eighth, though, and will be hopeful of claiming an upset at San Siro against Milan in their next league match on October 19.

The match will be played behind closed doors – unless Milan are successful with an appeal – after they were found guilty of insulting chants towards Juventus fans on Sunday.

"We are all focused on the game. But it will not be nice to play behind closed doors," Di Natale said.

"Udinese have to get 40 points this season – after that we can just have fun."