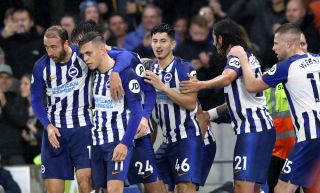 Digne slid home a cross from substitute Leandro Trossard in the fourth minute of added time after Albion striker Neal Maupay equalised in contentious fashion with the first Premier League penalty awarded with the use of VAR.

Substitute Dominic Calvert-Lewin looked to have earned the Toffees a first away win since March after Adam Webster’s own goal cancelled out Pascal Gross’ free-kick opener.

But the visitors were denied in sensational style as the Seagulls recorded successive home wins with two late strikes which pile pressure back on Everton boss Marco Silva.

Referee Andrew Madley pointed to the spot in the 80th minute following a lengthy consultation with Stockley Park.

Replays showed Toffees defender Michael Keane stood on the foot of Seagulls striker Aaron Connolly inside the box, although far stronger claims for spot-kicks have been waved away in the top flight this season.

Silva was furious with the decision and, after Maupay took full advantage from 12 yards, a miserable afternoon for the Portuguese was compounded by another late twist in rain-soaked Sussex.