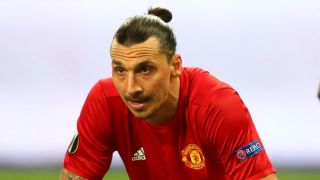 The Swedish star was operated on by orthopaedic surgeon and sports medicine specialist Doctor Freddie H. Fu at Pittsburgh's University Hospital, and Raiola said that the condition of his knee was better than expected.

The 35-year-old required surgery after sustaining a cruciate ligament injury during United's 2-1 win over Anderlecht in the Europa League in April.

Following a successful operation, Raiola told Expressen.se: "Zlatan has started rehabilitation at the hospital and will be monitored by Dr. Fu and Dr. Musahl until he is restored.

"His knee is so strong that the doctors said they had never seen anything like it.

"He has a knee that it is almost impossible for a football player with a 20-year career to have. It was quite clean, there was no harm in it."

Ibrahimovic signed his first professional contract as a footballer in 1996 and has played more than 500 club games across the course of his career.

His injury has ruled him out of the rest of the Premier League season and - out of contract at the end of the season - he is yet to announce his intentions for the 2017-18 season.

Raiola said Ibrahimovic would return to Pittsburgh when he calls time on his career, saying: "Zlatan is so strong that the doctor wants him back after his career to research on him.

"They work in the world's best research institutions for the knees and ligaments. They research a lot on the subject and that is why they are better than everyone else. And the doctors want back Zlatan to do research on him.

"So after Zlatan's career, we will go back and open him up again to do research on his ligaments."